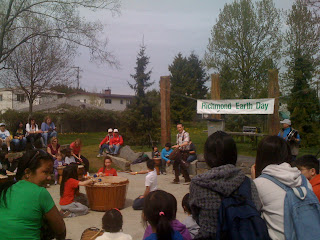 Normally, this would have been just another Earth Day observed in April like every other year. However, being a Mommy to a 5 year old gave it the importance it truly deserves or had deserved in the years past. Earth Day is that special day where we thank Mother Earth for all its bounties and in return do something good such as planting trees, keeping our surrounding clean, saving water and energy and following the green mantra-"Reduce, Reuse and Recycle." I had a pretty "green"
day today thanks to my daughter.
The city of Richmond had organized Earth Day at King George Park from 10am -2pm. Aaliyah came to know of this event through her Vice Principal Mr. Wilson. He is a French Immersion teacher and teaches grades 1 and up. Aaliyah and all her friends have great respect for him. They already made plans of attending the event. All they needed was an adult to accompany them. Aaliyah woke up early in the morning probably around 8am and started to wake me up. Waking up early on weekends is just not my thing. I asked her to go and watch the T.V. so I can squeeze in another hour of sleep. She leaves me only to return in 20 minutes. So I wake up with the least bit of enthusiasm. Happy Earth Day!
Aaliyah was already ready. I got Ayaan ready, cleaned the house, gave them breakfast and packed some snacks and water. I took the bag of clothes that needed to be put in the recycle bin. And instead of driving, we decided to walk. It felt good. It was my contribution toward the special day.
The park was beaming with over 300 volunteers from different community organizations and the neighborhood. Families and children were having a great time under the clear blue sunny skies. Volunteers helped clear and prepare the community garden, completed a wooden pathway on one side of the park and helped make the park look clean and green. The event planners had organized a drumming session then Mayor Malcolm Brodie gave a brief speech followed by speeches by the President of the East Richmond Community Association (Balwant Sangara) and the CEO of Tree Canada. After this, all those in attendance were treated to a special lunch prepared by chef Ian Lai. Aaliyah for a change was not interested in the food. She was busy playing with her friends from school. They climbed trees, walked along the perimeter of the park and played on the swings. The other Moms and I kept an eye on them from a distance and they did just fine without our interruption or interference.
Hummu joined us along with Zeba. We spent some time together and then I headed home with Ayaan. Aaliyah wanted to spend some more time with Zeba because the past two hours were just not enough for her. Zeba was enjoying going up and down the slides and Aaliyah was helping her little cousin.
I walked back home with Ayaan in the stroller. By the time I reached home I was sweating as hell. But it felt refreshing and energizing. I did something good for my body while doing something good for the Earth.
Posted by Hajira Rahim-Hussain at 4:48 PM