"Life is what happens to you when you are busy making other plans."-John Lennon
A friend shared this quotation on Facebook today and what a befitting day to share it than today. We were at the Richmond Masjid today for the Friday prayers and there we came across a lady who was mourning her Husband's death. The Husband's Janaza had been brought to the masjid for the Namaaz-e Janaaza (islamic funeral prayer). The family of four (husband, wife and 2 kids ages 4 and 2) had immigrated to Canada

Read more »
Posted by Hajira Rahim-Hussain at 2:06 AM No comments: 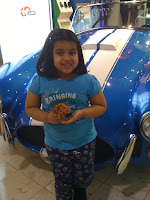 Aaliyah was all excited since last night about this morning's Breakfast Club at her elementary school. The Breakfast Club is a new project that the school has started in partnership with other community organizations to ensure that the students do not start their day with empty stomachs. It will be offered on Tuesday and Friday mornings from 7:55am-8:20am. Which means

Read more »
Posted by Hajira Rahim-Hussain at 10:06 PM No comments:

The Richmond Nature Park hosted a Reptile Show at their facility today. With the kids going back to school from Monday, this seemed like a pretty fun outing to end their 2-week long Spring break. It was a sunny day too and that was another reason to be outdoors. More than the Reptile show, it was the nature park that I was all excited about. Sunny outdoors, clear blue skies, natural surroundings and kids make

Read more »
Posted by Hajira Rahim-Hussain at 6:00 PM No comments:

Visit to the Mosque

After almost 14 months in Canada, we finally made it to the Richmond mosque today. I had almost made it last year but something came up and we had to change our plans. And since then the thought of going to the mosque was just that-a thought.
I woke up this morning when my dear sister called me up and suggested that we go to the Mosque today as it was Friday. It was too beautiful a day to be wasting in bed. So we woke up had our morning tea and by this time the kids were up too. Got them ready. Had breakfast and we were all good to go. Before going to the mosque, we had a quick errand to run. We did that and then reached the Mosque the same time as Hummu. In fact their car was right in front of ours. Talk about perfect timing!
My first reaction as we reached the mosque was that it felt like Eid. The hustle bustle, the rush, the fine clothes everything was a reminder of a typical Eid day. The mosque was packed to capacity maybe because it was Spring break and a bright and sunny day as opposed to the regular chill and grey days. It was comforting to see that there were other moms with little children too. Ayaan and Aaliyah read the namaaz with us for the most part. Zeba was happy and was playing around. I wonder why we stressed over the kids so much. They did not run around, did not bother other kids or cry. They were just so well behaved.
After the namaaz we ran into Iffath baaji. She is such a sweet lady. Her son will be going to Scotland to the University of Edinburgh. Wow! I wish I can be a dedicated Mom like Iffath baaji. Hmmm...
We then headed to Hummu's home to have lunch. She made yummy chicken and baghara chawal. We stayed back at her house to spend the day. The kids cannot have enough of Zeba and vice versa. They just love each other's company.

Posted by Hajira Rahim-Hussain at 4:00 PM No comments:

Last night I got really mad and upset with Aaliyah for not keeping her things in place. Aaliyah was working at her desk coloring something while Ayaan was playing with his toys. I was in the kitchen, putting things away. Suddenly, Aaliyah screams and announces that Ayaan is painting his nails on the bed. I immediately go to their room and find the bed sheet stained with nail paint and her hair bands all over the bed. I was furious. If only Aaliyah could have stopped Ayaan from taking her hair bands and the nail paints from the dresser. Perhaps it is too much to expect from a 5 year old. Anyway, I take the nail paints and the head bands and put it away. Then I asked them both to go to bed without any story time. I think I even told Aaliyah that it breaks my heart when she doesn't keep her things (head bands, nail paint, color pencils, crayons etc.) in their place.
Today, as I was cleaning up my bedroom, Aaliyah combs her hair, puts a matching hair band, walks into my room, sees the smile on my face and asks "Mommy is your heart fixed?"
Posted by Hajira Rahim-Hussain at 3:43 PM No comments: 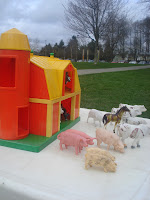 Another busy day today. Ayaan's preschool had organized a "spring carnival" today. It had a farm theme as the highlight of the event was a petting zoo. Along with this they had a bouncy castle, a mini jumper, a face painting table, different craft activity tables, a playdough table, floor puzzles, coloring activity table, farm animal toys and the like. Students from both the Little Explorers and the Kinderfun preschool program and their siblings were invited.
The best part was the

Read more »
Posted by Hajira Rahim-Hussain at 4:19 PM No comments:

Spring break has begun. I took the kids out to Watermania today. Its an indoor aquatic and fitness center that is fun for kids and adults alike. They have a wave pool, water slides, huge swimming pools with diving boards and a smaller swimming pool for swimming lessons. Along with this they also have a fitness center and a sauna room.
Aaliyah already had a free pass from her school so only Ayaan and I needed to pay the admission fee. After paying the admission fee, which was

Read more »
Posted by Hajira Rahim-Hussain at 11:49 PM No comments:

Ayaan has his own take on the famous lines from Robert Munch's classic book "Love You Forever." He was playing his favorite game Angry Birds on the Touchpad and after he was done he turned it off and held it in his arms and sang:


I love you forever
I like you for always
As long as I'm living,
My Touchpad you'll be
If Mommy can change the wording from my baby you'll be to my Ayaan you'll be then there is no reason for him not to. It just serves as a reminder that children learn by imitating and everything we do, we are being watched. So, we better be good, both for our conscience and for our children.

BC Teachers on Strike

Teachers all over British Columbia have gone on a 3-day strike starting from today. The decision to go on strike came about after months of unsuccessful bargaining between the teachers federation and the government over wages, class size, and lack of adequate funding. Whether or not the strike will sway the government's status-quo is yet to be seen. Meanwhile, Aaliyah is enjoying her extended long weekend. She goes back on Thursday, its Pizza day and she is all excited. There is a possibility that the teachers may go on strike on Friday too. So, if Friday ends up being a no instruction day like today then that will mean all the kids will get a head start on their Spring break that starts from Monday.
As far Ayaan, his preschool was open. Aaliyah and I went to drop him off at his preschool. Sometimes, I am so thankful for this dropping off-picking up routine. At least that gets me out of my PJs and into my jeans. And my mind is not in a weekend or a vacation mode. I am sleepy, slow and slack big time on my daily chores. Somehow, I tend to get a lot done on weekdays than on weekends. That's just the way it goes...for now at least.
Posted by Hajira Rahim-Hussain at 10:53 PM No comments: