Ayaan and I were at the Cambie Community Center's Preschool today to observe and participate in their KinderFun playgroup session. I went there with my head filled with doubts of whether Ayaan will fit in. Within the first few minutes, I was certain that he will.

There were about 12 kids (including Ayaan), 2 teachers and 1 parent helper. They started with circle time where they sang a welcome song to introduce each other. I thought it was cute.
The topic of the day was community helpers with a focus on fire fighters. They sang a song, read a story and even discussed what to do in case of fire...stop, drop and roll. The kids had fun doing this with the teachers and the other kids. Children mimic what they see others doing. Ayaan was no different and was just following others all along.

The teacher then demonstrated the reasoning behind stop drop and roll with a little science experiment. She lighted a little birthday candle placed on some playdough and inverted a glass jar over the lighted candle. While she was lighting the candle, Ayaan immediately started to rush toward the candle to blow it. He is so used to blowing candles at every birthday/anniversary party that he just thought it was his time to blow. The teacher told him in a very calm voice, that we were not blowing the candle. And he stayed put. I remember doing this experiment in later grades but definitely not in my nursery/preschool or kindergarten classes. No wonder kids are smarter these days.

They had free play after that and Ayaan did fine here too. They had a table for making a fire engine out of paper, had a table for coloring a fire fighter, a painting station, a sand table, a house/pretend play section etc. He played in a group and individually. The playing in a group was one of my concerns and he put it to rest. He was fine with the other kids. I clarified my other doubts with the teacher while Ayaan was busy with the playdough and then we left before snack time and outside playtime.

I think Ayaan is ready for preschool. He likes to sing, dance, enjoys music, is beginning to recognize letters and numbers and adding new words to his vocabulary everyday. He would love to share all this with children his age. Preschool will also be a welcome change from his everyday routine of watching the TV, or the laptop or playing games on my phone. Without all these gadgets he looks like a lost kid. It is definitely  time for preschool. 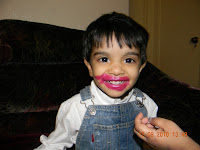 Posted by Hajira Rahim-Hussain at 5:42 PM